Shoring up the foundations for future generations 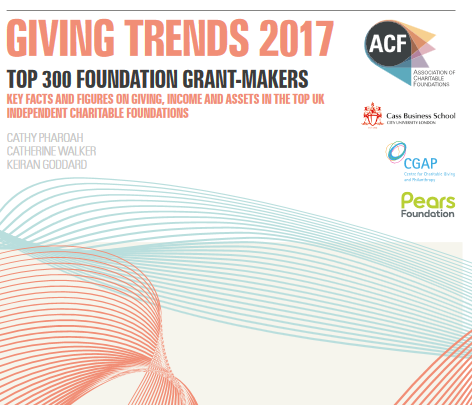 Shoring up the foundations for future generations

Posted on March 10, 2018March 13, 2018 by Cathy Pharoah
Relief not complacency is the message of the 9th annual edition of Foundation Giving Trends,  flagship annual report on giving trends amongst UK foundations.  Philanthropic foundations are a solid bedrock of support for civil society. So it is a relief that spending reached its highest level ever in 2015/2016 after some years of bumpy post-recession trends  – almost £3 billion. But does this mean that government hopes of philanthropy increasingly meeting gaps in public spending are about to be realised?  The spending growth was not achieved through new giving, but largely on the back of assets which reached a record high in value at £60 billion. This enabled an additional £558 million of spending, but two-fifths relates to the giant Wellcome Trust’s grants alone. And with UK growth now forecast to fall, asset growth may be hard to maintain. Today’s charitable endowments are the legacy from previous generations of donors, but increasing numbers of foundation donors today are choosing to do their giving while living. The list of top foundations today bears witness to the gifts of the many successful entrepreneurs of the last two decades – David Harding, Sir Donald Gosling, Sir Michael Bishop, Denise Coates, Sir James Dyson – but the evidence of this year’s foundation trends is that the pace of new giving is slowing. The shape of wealth in our society continues to concentrate at the top, with increasing amounts in fewer hands – who need to, and can, create the large new foundations to nurture society for our future generations.
ACFCharityFoundationsGivingPhilanthropytrendsUKWellcome Trust